Originally there was supposed to be 3 of us on the Key West trip, but my one friend wasn’t able to go at last minute. So in the end the Key West trip was just two of us. I picked up my friend Kristen about 10am and from her place I drove down to Key West. The drive was uneventful and luckily we had gorgeous weather (thankfully no rain!).

The only thing to note about the drive is that it can take a bit of time depending on traffic. A lot of the issue is because of slow drivers who can’t seem to follow the speed limit. There seems to be a lot of tourists who gawk and drive slow just to stare at the water. If you are able to pass the slow gawking drivers, do it! It probably took at least an hour longer to get from Key Colony to Key West because of super slow drivers.

While driving down we didn’t stop anywhere besides Key Colony for lunch. We decided we wanted to eat somewhere with a view and searched on Yelp for a restaurant. We stopped at Cabana Breezes, which was right on the water and couldn’t have a better view. For lunch I had the Blackened Mahi Mahi Sandwich. The fish was cooked perfectly and I would highly recommend the sandwich. 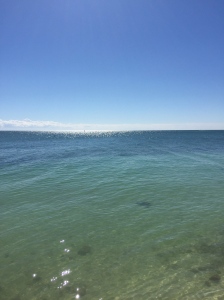 After lunch we got back to driving down to Key West. We probably got into Key West late afternoon. This actually made me late for a couple appointments I had. Since this was technically a “business” trip, I had to go tour the other 3 hotel properties the company I intern owns. Originally planned on walking to each, but I had to drive due to traffic making me late. All I can say is driving around Key West is a pain because of roosters and bicyclists.

Once the tours were complete we went and checked in at the property we were staying at. The only comment I can make about this is what a huge pain this was. The property has no parking and no unload spots either. We had to go park at the local parking garage that is a few blocks away and walk with all of our stuff to the hotel. By the time we got to the hotel we were exhausted. Not a fun way to begin our time in Key West.

After resting up for a bit we headed out to Duval Street for dinner. We walked around the street for a bit trying to find somewhere to eat. We were recommended to try Smokin’ Tuna Saloon, which is right off of Duval Street. This meal turned out to be a winner. First we checked in on Yelp, which gave us a free Conch Fritter appetizer. These were probably the best Conch Fritters we had in Key West and they were delicious. For our entrees we both ordered the Lobster Tail. This was a deal! For $24 you got one pretty decent sized Lobster Tail, Onion Rings, and Coleslaw. I really liked the restaurant, even though the live music left a lot to be desired. 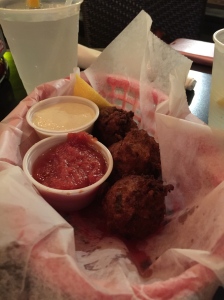 From here we decided to walk around a little bit and then stopped at The Porch for a drink. The Porch is a craft beer bar and then on the other side they have their bar called The Other Side. The Other Side serves craft cocktails that were amazing. Both places were probably my favorite bars in Key West since they weren’t touristy. We probably were here for about 4 hours. The service was fantastic at The Porch from the bartender and we did get a couple drinks on the house. I would definitely come back to The Porch again for my next visit to Key West.

Once we left The Porch we headed back to the hotel for some sleep since we were exhausted. We planned on sleeping in the next morning, which of course did not happen.