Yesterday we actually got an early start and were up by 5 am. We decided to try the breakfast at the hotel a couple hours later since it was early and had no clue what was around. The breakfast was average, overpriced, and lacking in selection. This is probably the only let down at the hotel I can think of so far.

After breakfast we headed out towards the Anne Frank Huis. Back in February I purchased the Anne Frank tickets online, which is one of the best ways to go. By purchasing the tickets online you avoid the queues and can get right into the museum at your time. Since the tickets were for 11 am, we still had a couple hours to go so we first bought the GVB multi-day travel card. The GVB pass we purchased is good for 48 hours and only cost €12 each. The GVB pass covers all GVB trams, buses, and metros. We were able to buy the tickets from the concierge at the Crowne Plaza and we later activated them once we entered the tram. Every time you enter or leave the tram you have to scan the card, which is very simple and easy to do. Originally I looked at the Hop-on, Hop-off bus, but found the limited number of stops to not be the best way to go nor the limited timings. The local GVB transportation is a great way to get around Amsterdam since there are constant trams running. 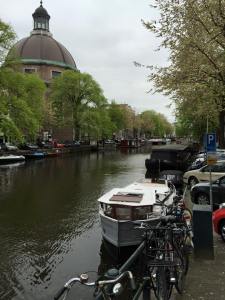 Since we still had a while to go before the ticket time for Anne Frank Huis, we walked around the surrounding neighborhood. We first walked past De Poezenboot, which is the only animal sanctuary that floats on water and houses cats. Since it was so early there was not much to see unfortunately. We then headed to the Amsterdam Cheese Museum. This is both a shop and museum, where there are tons of samples to try. I actually ended up purchasing two types of smoked goat cheeses for myself, while my Mom bought a couple type of pesto cheeses. All the cheeses can be brought back into the United States from this store. The shop had some fantastic cheeses and really neat cheese related souvenirs from Holland.

We then headed to the Anne Frank Huis and waited until our ticket time. The line for those without tickets was around 3 ½ hours to 4 hours according to the employee at the ticket door. Sometimes during the year the line can be up to 7 hours. Once it was 11 am we were able to enter the museum immediately and go through the security check. Overall I found the museum to be underwhelming and difficult to navigate through because of the amount of people already inside. This was a huge disappointment for me because I have always wanted to go to Anne Frank Huis. It was hard to read the captions for photos or room descriptions because so many people were crowded around trying to read or would block the view for a good 5 minutes. This made it difficult to know what each room actually was. Crowd control is definitely an issue at the museum. By 11:30 am we already had finished touring the house and then exited into the newer addition to the museum. The newer side of the museum includes the typical tourist trap café and gift shop, which really seem out of place here and do not fit the purpose of the site. 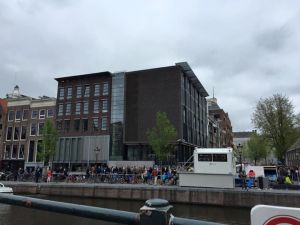 The right side is the newer section of the museum, which I thought detracted from the overall look of the canal house.

After leaving Anne Frank Huis we headed to House of Bols. House of Bol is the world’s oldest distilled spirit brand and has been making liqueurs in Amsterdam since 1575. This was a really fun way to spend a couple hours in the afternoon. Before going I purchased the tickets online since advanced purchase does save a few Euros, plus I found a 25% off coupon code that saved more. The exhibit provides information and history about House of Bols and the experience of smelling, sight, and tasting liqueurs. One room is dedicated to taste where you try two different tasting strips and have to guess the flavor. Another room has around 36 bottles where you can smell the liquid to guess the aroma. After going through the House of Bols your ticket provides you with a drink and two tastes. 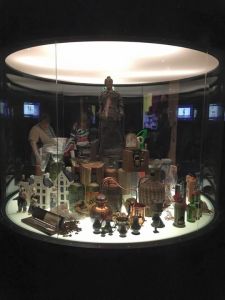 For my drink I ordered the Blood Red Orange, which is a mixture of Bols Genever 21, Bols Red Orange, lemon wedge, orange wedge, and cane sugar. The drink was really refreshing and was not light on the alcohol. For my two tastes I tried the Bols Passion Fruit and Genever Barrel Aged. The Bols Passion Fruit tasted exactly like a fresh passion fruit and would definitely go a long ways for a drink. The Genever Barrel Aged is slightly like a gin but different. By barrel aging the Genever this helped to smooth out the sharpness of the alcohol. Of course anything barrel aged is great in my opinion. There is a really cool shop connected to House of Bols where they sell vintage metal prints, liqueurs, and some great gift sets. 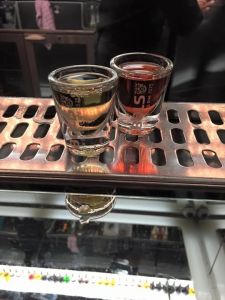 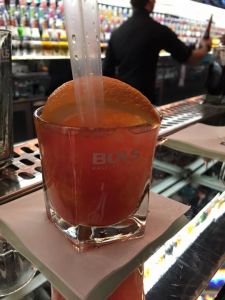 After leaving House of Bols we headed to the square area in front of the Rijksmuseum. Right now there are these bunny statues in the square, which are actually put there by UNICEF. There is a temporary store as well to raise profits for UNICEF were you could by a replica of the statues.

Leaving the area near Rijksmusuem we took the tram and headed to the Bloemenmarkt. Since it was a Friday this area was packed with tourists and locals! The market is one of the only floating flower markets where the flower stalls stand on houseboats. I found a couple touristy tulip items to purchase. Across from one of the stalls we came across a print shop that had some local art by Amsterdam artists and vintage prints. I purchased two prints that came to €26. One is of Amsterdam and is a print of canal houses. The other print I purchased is a reproduction of an old Holland tourism advertisement.

We then headed back to the hotel and stopped at a nearby Indian restaurant for dinner. There are a lot of international restaurants in Amsterdam, which really provides a lot of variety.

Nearby Indian restaurant to the Crowne Plaza