A couple of days ago we were in Wurzburg and decided to select the optional tour to Rothenburg ob der Tauber. So far this has been my favorite optional tours through Viking. 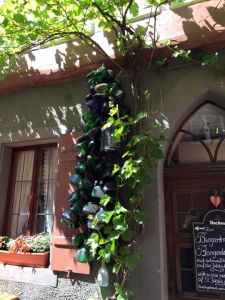 Rothenburg is about an hour and 15 minute drive away from Wurzburg. The drive is on the Romantic Road through the Franconia countryside, which can be a bit bouncy at times. Most of the area is farmlands or small little villages, so the drive is very pretty.

We arrived after the drive through the countryside and were dropped off just outside the old walls to the medieval town of Rothenburg. Before starting the tour we had the typical bathroom break, which seems to last forever and a day on each tour anymore. Once the bathroom break was over we set off on the brief guided tour of the town before lunch. 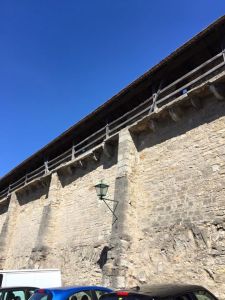 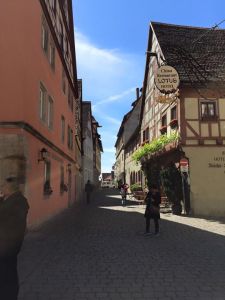 We visited the main square and walked past some sort of torture museum. The guide did provide an explanation of one of the main bakery items from Rothenburg. The item is shaped like a ball and can be coated in chocolate. I can’t remember the exact name of the treat, but it is close to the name of schweaty balls. Unfortunately I didn’t buy one at the time and now I’m regretting it. 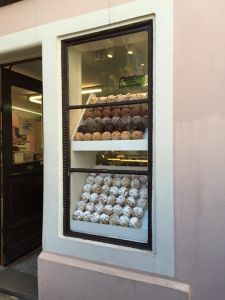 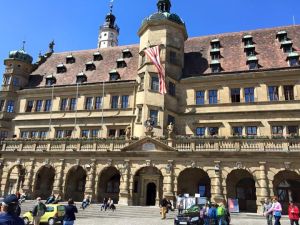 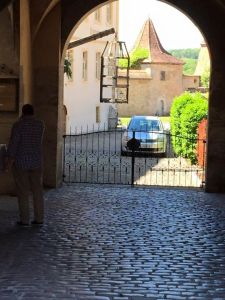 After the tour introduction to Rothenburg we had a German lunch at one of the restaurants, which was included in the tour. The lunch included a soup, the entrée, dessert, and a drink. We first started with the dry white wine that paired well with the entire lunch. Since it is currently asparagus season, the restaurant made an asparagus soup that was very good. Next was the entrée that was sausage, sauerkraut, and mashed potatoes. Now the potatoes were just okay since they tasted like instant, but the sausage and sauerkraut were delicious. Last we ended with the apple strudel. 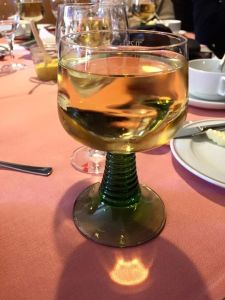 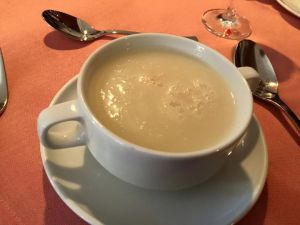 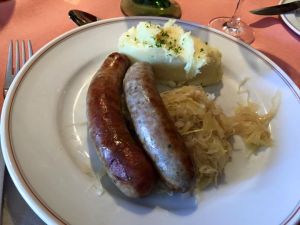 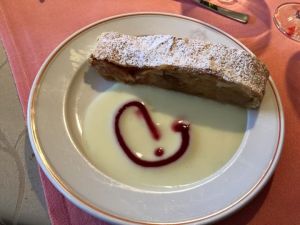 Once we were done with lunch we had a couple hours on our own, so we walked around and looked at the shops. One thing I really wanted was a nice beer stein, so we searched around some of the shops. I found one that included scenes throughout Germany and was a limited edition stein. Next we checked out the popular Christmas store. Here we bought just a couple little things since we thought the store was really overpriced. We were later told the company that owns the Christmas store also owns about 10 to 12 stores in Rothenburg. 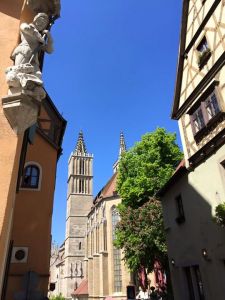 After walking around for a while we stopped in another store, which actually turned out to be really interesting. Rick Steves is really good friends with one of the shops in Rothenburg and actually mentions it in his guidebook. Since we knew of Ricks Steves and live in the same area as him, the shop actually gave us a discount on the couple things we bought. I can’t remember the name of the store right now, but it is right near the town hall and has much better prices for souvenirs than the Christmas store.

Since we still had about an hour left before the tour left we decided to sit at a local café and order another class of wine from the area. We had a 2013 Volkacher Kirchberg, Muller-Thurgau Trocken. This wine was dry but had a light floral characteristic. After we finished our wine it was time to go. The bus ride back did seem a little shorter since the driver went on a different rode back to Wurzburg. 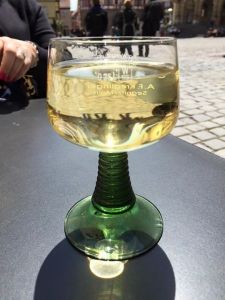 The one super odd thing I thought was during the bus ride from Rothenburg to Wurzburg. At one point the tour guide said there was a refrigerator up in the front of the bus and the bus driver had drinks for sale. Beer, wine, and water were sold ranging in price from €1.50 to €3. Now I thought this was weird and so did my Mom, but amazingly people bought the beer and wine. Actually the beer and wine sold out and only some water bottles were left. I thought this was really tacky and have never seen it before on any tour.

I will admit we did skip the end part of the tour that would have taken us to the Residenz Palace in Wurzburg during the afternoon. At this point we were kind of tired of listening to some of the people in the tour group and figured we will be back one day in Wurzburg. The bus then took anyone back to the boat that wanted to go and we sat out on the top deck for a couple hours in Wurzburg.