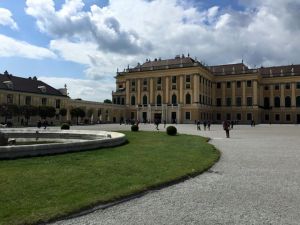 Now that I’m back home, I wanted to finish the last few posts that I ran out of time to complete.

On May 28 we were in Vienna and this day we skipped all the Viking excursions. Viking does offer a variety of excursions in Vienna. The included excursion had two options, one was more of a bus tour and the other tour was walking only that utilized public transportation. Additionally, an alternative excursion was offered by Viking for no charge that was on Art Nouveau. During the afternoon there were two optional excursions offered, one to Schönbrunn Palace and the other a market tour with the chef. In the evening Viking offered two additional excursions, the Mozart concert or a backstage tour of the Vienna boys choir (both tours were very popular, though neither interested me at all).

Instead of taking the included tour in the morning, we had planned before to go to Schönbrunn on our own that day. I didn’t feel like the optional tour offered by Viking included enough time at Schönbrunn. A couple days before we arrived in Vienna we mentioned to Caitlyn (program director) that we would be going out on our own. She offered to go over the transportation with us to Schönbrunn. Even though I had looked at the transportation beforehand, we really appreciated her willingness to help us. When we sat down with Caitlyn she went over exactly how to get there and actually gave us tickets for the metro in Vienna. 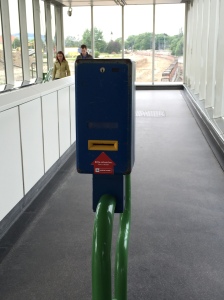 This is where we validated the metro ticket we were given. Each station has one near the entrance.

Before leaving on the river cruise we purchased tickets ahead of time for Schönbrunn at the palace website. We actually purchased the Sisi ticket for €28. The ticket was valid for one year from the date of issue and provided a fast-track into the museum (which skipped most of the major lines). The ticket provided access at Schönbrunn to 40 rooms, which are part of the Imperial Tour and the interior rooms of Maria Theresa. Additionally the ticket does provide access to Hofburg and the Imperial Furniture Collection, which we just did not have time to go to.

How to get to Schönbrunn from the riverboat docking location:

Once you disembark your riverboat, you will take a left and walk towards the bridge. When you get to the bridge you will walk up the stairs and take a right towards the city, not the water. You’ll then walk along the path until you get to the first street light. At the streetlight you’ll see two entrances to the metro station, one on the left and one on the right. This metro station is Vorgartenstr. (Vorgartenstraße). Stay on the same side of the street you are on and take the metro on the right side, if you go to the entrance on the left you will be on the wrong line direction to get to Schönbrunn. Once you head down the metro stairs you can either buy your ticket or validate one you may already have.

The metro line you will want is U1, which is the red line. You will take the metro line that says Reumannpl. not Leopoldau. You will only take the U1 line for three stops and get off at Schwedenpl. At Schwedenpl. you will switch to the green line, U4, which is easy to find from the signage provided. You will want to get on the green line headed to Hutteldorf. You’ll stay on the metro for 9 stops and get off at the stop called Schönbrunn, which is right near the palace. For the metro, you just need to know the last stop on the line to figure out which direction to take.

It took us around 30 minutes with the metro to get out to Schönbrunn and once there it was about a 10 minute walk from the metro station. Now one thing to note, it is better to get out there early. We were about an hour later than we had planned since we did not get moving fast enough in the moring. By 10am Schönbrunn was already packed with numerous tours and was getting busier by the time we left. (Just a side comment, we were told by someone that May was busier with tourists than previous years. Even the Wall Street Journal wrote an article about a massive increase in tourists to Europe this year).

Schönbrunn Palace is the former imperial summer residence and has 1,441 rooms. The design of the palace is in a baroque style and is considered an important architectural monument in Austria. Originally the grounds were a hunting estate for the Holy Roman Emperor Maximillian II, when he purchased the grounds in 1569. From 1638 to 1643, Eleonora Gonzaga added a place to the former Katterburg mansion on the property that then became known as Schönbrunn, though the present form of the palace did not exist until later. The palace was built in remodeled in 1740 to the 1750s by Empress Maria Theresa, whose influence is seen throughout the palace.

Going through Schönbrunn on our own was very easy and an audio guide was included. We passed on the audio guide and took the reading material instead, which made it easier to get through the palace since it was wall-to-wall people already and hard to hear at times. Inside the palace you are not allowed to take photos and this was strictly enforced. We saw a few tourists being told off a couple times who had taken photos.

Once we finished touring the castle we walked around the gardens. One garden has a fee to enter so we did skip it. We probably spent around 40 minutes looking at the gardens. One odd thing we noted was the gardens were full of weeds and the grass desperately needed trimming. I was a bit surprised by this since the gardens are such an important feature at Schönbrunn. 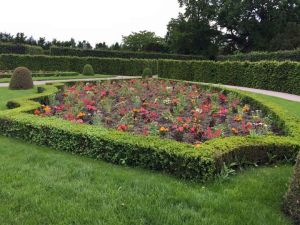 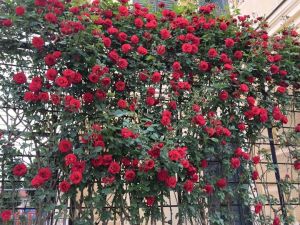 After leaving Schönbrunn we headed back to the metro. Instead of heading back to the ship we took the metro to Karlsplatz and switched lines to the red line and got off at Stephansplatz. This area has a lot of shopping and restaurants, and is considered the center of Vienna. The main site to see here is Stephen’s Cathedral. 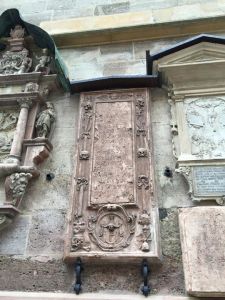 St. Stephen’s Cathedral is influenced by both Romanesque and Gothic design and was largely initiated by Duke Rudolf IV. The cathedral actually stands on the ruins of two earlier churches. Construction commenced in the 12th century and the cathedral is considered to be the most important religious building in Vienna. Many important events in Habsburg and Austrian history took place here. 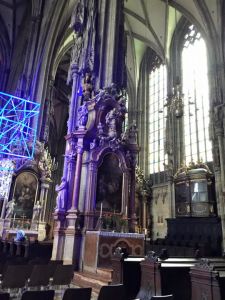 Originally I had planned on taking a catacomb tour here, but would have had to wait for the tour for awhile. I figured I’ll be back to Vienna one day and will do it then. Instead we paid around €5 to take the lift up to one of the towers, which provided fantastic views of Vienna and of the architecture of the cathedral. 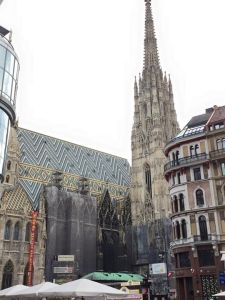 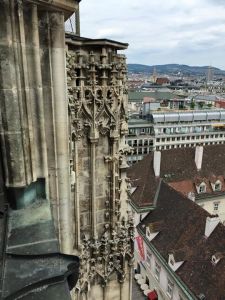 After leaving the cathedral we stopped at one of the nearby cafes and had a dessert and coffee. We then walked around the area and shopped at a neat market that surrounded the church. Both my Mom and myself ended up purchasing some glass jewelry, which was very unique. From here we headed to the chocolate store that sells Mozart’s balls, well chocolate balls with Mozart’s face on them. After this we then headed back to the riverboat for the evening.