For our first day in the park, we didn’t make any dining reservations since we had originally booked the dessert party later in the evening, but that was cancelled on us by Disney. Since we arrived at the park earlier than we had planned, we checked out the new Jungle Navigation Co Ltd Skipper Canteen.

In December the restaurant was not taking reservations since it had just opened a few days before we arrived. At this time you could tell the cast members were practicing various jokes and memorizing a script since many of the cast members were using the same exact phrases. Luckily our waiter did not partake in the corny jokes during our meal.

We had around a 15 to 20-minute wait before being seated in the “secret dining room.” The restaurant has a jungle cruise theme obviously and the food is inspired by “exotic” cuisines around the globe.

We started with the falafel appetizer and we all really enjoyed this. The meal also came with bread and a honey dipping sauce (the dipping sauce is fantastic). For my entree I ordered the Char Siu Pork, which was great and the meat surprisingly tender! Everyone else ordered the “A Lot At Steak” Salad, which was a Thai marinated steak salad. Overall a great new restaurant addition to Magic Kingdom. 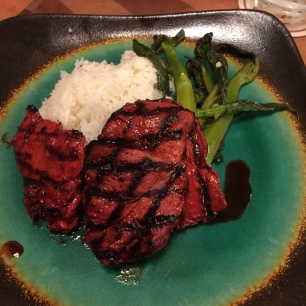 After our late lunch/early dinner we waited for our FP+ reservation time at the Jungle Cruise (Jingle Cruise in December). In December the ride was decked out in Christmas decorations and all the jokes were holiday inspired. Afterwards we walked around since it was getting late and we had a FP+ reservation for Holiday Wishes.

The fenced off area opened up about an hour and a half before the firework show started. Before the fireworks started there were  also two different shows in front of the castle. The first was A Frozen Holiday Wish, which was a castle lighting ceremony. The castle lighting is actually very pretty, minus all the Frozen hoopla. The second show was Celebrate The Magic, which is a musical light show focusing on various Disney stories. Celebrate The Magic starts around 15-minutes before the Wishes Fireworks show begins. This show was really great and showcased what seemed like some of the forgotten Disney movies.

The real highlight though of the evening was the Holiday Wishes: Celebrate the Spirit of the Season. The firework show seemed to be around 15 to 20-minutes long and of course put everyone in the Christmas spirit. Once the show was complete we decided to head back to the hotel after the drive from Miami that morning. 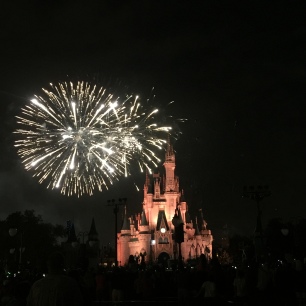 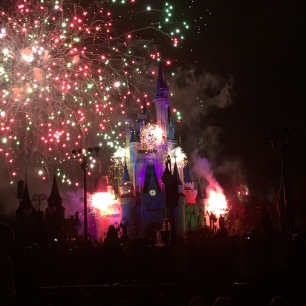 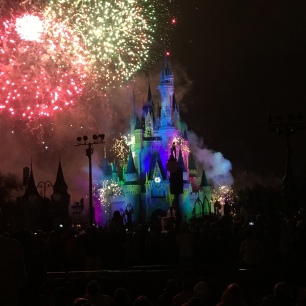