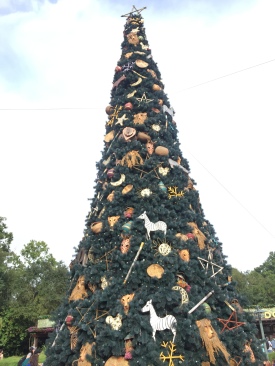 We spent the morning at Animal Kingdom on Christmas Eve and later in the day we park hopped to Hollywood Studios for the evening. This was the only day we used the park hop option with our pass to the parks. Unlike Disneyland, we found there was really no need for the park hop addition to our park pass. This was an expensive add-on that we just didn’t utilize like we had originally expected.

Animal Kingdom did feel like a half-day park experience since we covered most of the park within a few hours. This park (along with Hollywood Studios) is going through an expansion, which should add to the experience in the next few years. Right now it is too bad the park experience lacks since this is probably the best themed park at Disney World with an incredible amount of detail in the decor. The only downside to the park is how hot it is, which is most likely due to all the foliage that makes it feel like you are in the tropics. This park feels about 20 degrees hotter than the actual temperature at the rest of the parks. 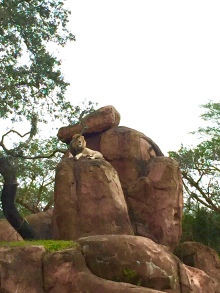 The main attraction at Animal Kingdom is the Kilimanjaro Safari. I made sure I had a FP+ reservation as early as I could get, which was for 10:45am. I was hoping to get an earlier time since this is an attraction best seen earlier in the day, but all the earlier FP+ reservations were gone by the time I could select a fastpass.

The Kilimanjaro Safari is an open-vehicle safari ride through a savanna that is supposed to resemble various areas of savanna in East Africa. The attraction features numerous animals including elephants, giraffes, ostriches, and rhinos to just name a few. If you go to Animal Kingdom, this is a must see that can’t be missed. 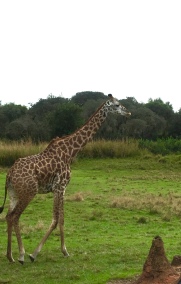 Afterwards we walked around the park and tried to get lunch. The restaurants

were packed and unfortunately even the fast-casual restaurants were busy with no seating,
so we ended up just getting a Starbucks to last us for awhile and walking around the park. We had an early afternoon FP+ for Dinosaur, which is basically the same exact ride track as Indiana Jones in Disneyland. The Indiana Jones version though is much better I believe.

After awhile we headed back to the hotel for the afternoon to clean-up since we were spending the evening at Hollywood Studios.