The last time we were in St. Kitts was in 2009 on a cruise where we ended up taking an entertaining island tour. The tour took us to Caribelle Batik and Brimstone Hill Fortress, which are must see stops in St. Kitts. After leaving the fortress the tour guide/driver drove over some sharp rocks, which of course caused a flat tire! This is one experience that has always stuck with me since part of the group got stuck changing the tire! This time we decided against another island tour of St. Kitts and we weren’t interested in going to any of the beaches on St. Kitts either. I then started exploring the idea of going to a nearby island for the day.

Technically St. Kitts is a dual island nation referred to as Saint Kitts and Nevis. You may already be familiar with Nevis from US history, thanks to Alexander Hamilton. St. Kitts is the larger island and home to the capital of Basseterre; Nevis on the other hand is both smaller in size and population. Now both St. Kitts and Nevis are covered in a tropical rainforest and interestingly both islands have volcanic origin. St. Kitts technically has a mountain reaching over 3,700ft (Mount Liamuiga).

Sailing from St. Kitts to Nevis

For our day in St. Kitts we ended up taking a tour to Nevis. This is one time I would recommend a cruise line tour since the ferry schedule does not always work for the port schedule. If you are interested in the tour, the tour we took through Princess Cruises was Nevis Island Tour, Beach & Lunch. The title of the tour basically sums up the tour experience in a few words, but I will of course go into more detail!

The boat ride from St. Kitts to Nevis took around 45-minutes to an hour. Nevis is actually about 2-miles to the Southeast of St. Kitts. Now the boat used to cross the channel was fascinating since it felt like a large party boat. Truthfully, I’m not sure if the boat was really meant to cross a channel but we made it both ways at least! The boat dropped us off in the town area of Nevis and it later picked us up at the beach. Disembarking the boat was easy since it was on a pier. Now for those with mobility problems or someone who doesn’t want to embark a boat in sandy water, this tour may not be for you. (Note: I do recall people were surprised we got back on the boat at the beach. Some of the participants had on tennis shoes and were not prepared for a water entry)

Once we were in Nevis there was a line of vans waiting to pick up all the tour participants. The van portion of the tour took us around Nevis for about 2 hours. Right after boarding the van in Charlestown we drove past the birthplace of Alexander Hamilton. Now I do have to admit I was disappointed we did not stop at the house where Alexander Hamilton was born. Instead we had a quick photo opportunity from the van, which caused most of my photos to be pretty blurry. The house is considered to have great historical value to the island and I think this was a huge missed opportunity for the tour. I personally would have loved to stop at the house and walk around! 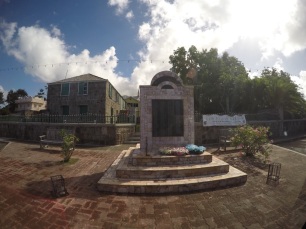 After the quick drive-by of the birthplace of Alexander Hamilton, the tour guide took us to the Bath Hotel and Spring House. Not to be Debbie Downer again, but I do think this part of the tour could have been skipped for something else. We mainly looked at the springs and had the opportunity to walk around a little. To be truthful there was not much to look at during this stop, which was too bad because Nevis was a neat island. The hotel is no longer in service and needs significant repairs. If the site was restored, I think this could be really interesting historical site. Unfortunately, it felt like much of the Bath Hotel and Spring House has been left in disrepair. 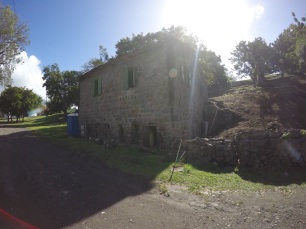 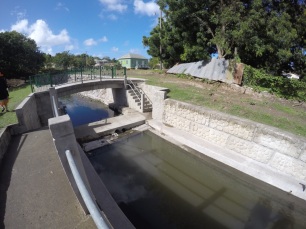 Next, we were driven around the island for a while and then stopped off at the Golden Rock Inn. This property stretches up the slopes of Nevis Peak and is one of many historical plantation inns on Nevis. The Golden Rock Inn is a small hotel (11 rooms) on 100 acres of land. The property is rather fascinating since it is steeped in history and dates back to the 1800’s. The former sugar mill has now been turned into a suite. Besides the history of the buildings, the property has an extensive tropical garden with beautiful fauna and flowers. The property is also home to Green Monkeys and a wide array of birds. From my understanding the property also features hiking trails for guests, which we did not have the chance to explore before leaving. If I was staying on Nevis for vacation, this property looked like a great relaxing hideaway. 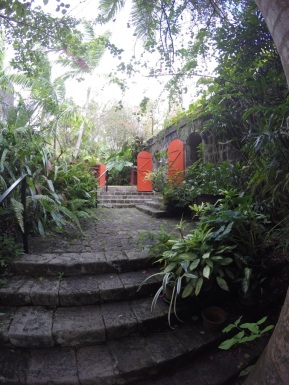 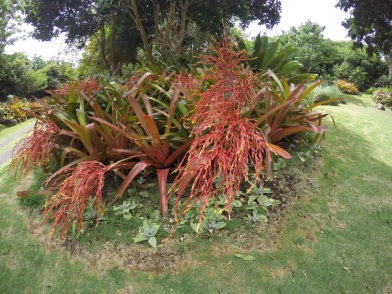 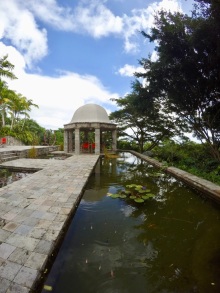 Once we were done touring the Golden Rock Inn we then headed to lunch at the beach. The tour included lunch at a local restaurant, LIME Beach Bar. Typically, most cruise ship tours with lunch have been a bust over the years but this turned out to be a fantastic meal. We had a choice of barbecued chicken or fresh fish with salad and rice.

This was a no-brainer and we all selected the fresh fish. The fish was moist and not overcooked, plus was a huge portion! We had around an hour for lunch and once we were done we could head to Pinney’s Beach right by the restaurant. We ended up waiting for a bit since it started to rain (more like pour). In the rain Pinney’s Beach looked a bit dingy, but cleared up once the sun came out!

We had about an hour to spend at the beach before heading back to St. Kitts. We actually could use the lounge chairs and umbrellas for free since we had dined at LIME Beach Bar. The tour description noted we would have to pay to use any beach chairs and luckily this turned out to not be true. The beach was popular with locals and there were quite a few people around since the holidays had started. There were also some other beach bars around besides the restaurant we ate at. We ended up just using the lounge chairs for the day. I would recommend wearing water shoes since there was a lot of glass on the beach, which was a problem encountered at most beaches in the Caribbean this vacation.

As noted earlier the boat actually picked us up directly at the beach. To me this was convenient because we didn’t need to clean-up before entering a van. Some tour participants were not prepared to step into the water and climb onto a boat. If you decide on a tour to Nevis from St. Kitts, just plan ahead for a beach entry. This is something the tour description did not mention, which could be a problem for some individuals. As we were leaving Nevis the sun came out and we had a gorgeous view of the clear water. With the sun finally out, Pinney’s Beach looked rather nice! The trip back to St. Kitts took around 45-minutes to an hour.

This tour was a great alternative to St. Kitts for the day and I highly recommend visiting Nevis since the island does not have the commercialized feel of other Caribbean islands! Personally I really enjoyed Nevis and hope the island will be able to keep her charm.

*Note: During our time at Pinney’s Beach there was an incident that occurred with a group of individuals harassing marine life. Even if the incident was insignificant to some, I am still disgusted a group of passengers from the Pacific Princess (who were not kids or young) felt the need to remove a sea creature from its habitat. The poor sea creature was passed from person to person for photo opportunities and was out of the water for an extended period of time. When something was said to the passengers about putting the sea creature back in the water, they begrudgingly responded to the request. Later the sea creature was removed again by the same group for photos. I can only imagine the outcome for the sea creature after being out of the water for extensive periods of time.

Please remember when traveling to respect wildlife and marine animals. It truly does not matter how small, large, or inconsequential an animal may seem, you should not touch or remove wildlife from their habitat. Everyone needs to take responsibility when traveling, even if its just a friendly reminder to tourists about keeping their hands to themselves!