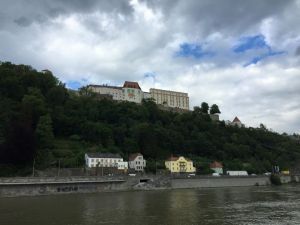 Today we actually disembarked from the Viking Baldur and now at the hotel in Budapest, which made for the easiest time to update the end of the blog for the river cruise. Meant to do this sooner but the last few days have been a bit busy at times or poor Internet connection. Four days ago we were in the river cruise port of Passau, Germany. This was actually our last German port of the river cruise before heading to Austria.

In Passau, the Viking Baldur was docked right in town near the main little shopping area. Passau is known as the City of Three Rivers, where both the Inn and the Ilz join the Danube. We were actually docked next to an AMA boat at one point during the morning and later on we were next to an Avalon boat. Today there was a walking tour offered by Viking, though we decided to skip this. The tour basically just walked around the city and saw the main sites from the outside. At noon there was a free organ concert as St. Stephan’s Cathedral through Viking. To go you had to sign up for tickets the night before and since we did not know our timing for the next day, we did pass on the concert. 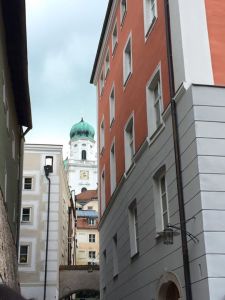 Passau is very easy to walk around on your own to see the sites. We headed off the riverboat right after breakfast and walked past the Church and stopped inside for a bit. We luckily avoided running into any tour groups during the day. St. Stephan’s Cathedral actually contains the largest pipe organ in all of Europe. From here we headed towards the location of the town hall of Passau, which is from the 14th century.

After walking around for a bit we did a little shopping in Passau since there are a few unique shops here besides the couple junky tourist shops by the river. One thing to note in Passau is many of the shops did not take credit cards at all. This actually was our first place coming across this the entire cruise, so definitely have cash on hand if you plan on doing any shopping in Passau.

One of the first places we stopped at was a spice store called Gewurz Depot. The store actually was recommend by Viking but was interesting to walk through. There were a lot of unique spices, which I can’t find in Miami. I did buy a bruschetta and African spice mixes. These probably weren’t the typical things to buy in Germany but something I will use at home. Next we headed to the other recommended shop right next door, which was a marmalade and jam shop. Here there were a few samples to try of some locally made and imported jams and marmalades. I did end up buying a kirsch amaretto jam to take home that was absolutely delicious.

After looking at a couple shops we headed back to the boat to drop off our purchases but on the way stopped for lunch at a nearby restaurant since the riverboat was redocking after the AMA ship left. We lucked out on our timing at the restaurant since it wasn’t busy and it started to rain. We were able to eat outside since some of the restaurant had a covered glass patio. I ordered their hefeweizen, which I believe was made on site while my Mom had a glass of Gruner Veltliner wine. We both ordered the same meal of the wiener rostbraten, which is basically a Vienna steak with braised onions. The meal came with a salad and pommes frites. The lunch was good but I will say the meal was rich due to the sauce and was a bit salty.

Once we dropped off our purchases we did head out again to walk around. We found a couple wine shops near one of the bridges and bought two bottles of Gruner Veltliner (currently one of our favorite white wines right now). This style of wine is primarily from Austria, but is actually starting to come out of the Unite States as well right now. To me it is a drier white that can sometimes have flavors of apple to grapefruit, depending on the vineyard.

After buying a couple bottles of wine I found a really unique liquor store where you could get bottles filled of liquors and spirits from around the globe. Of course being the typical pattern of the trip, I did end of buying a small bottle of cherry flavored vodka to take home. This actually was relatively inexpensive for about €7. From here we headed back to the riverboat and called it a day.