Before the river cruise we had received an itinerary change noting we would not be stopping in Krems. Once on board though the itinerary changed back to the original itinerary with a stop at Melk in the morning and Krems in the afternoon. The best part of the day I think was sailing through the Wachau Valley.

The first stop at the day was for the abbey in Melk. Really I’m not a huge fan of churches, cathedrals, or abbeys, so for me I could have easily just skipped the tour. The Melk Abbey is about 900 years old and was rebuilt in the 18th century after the original building was destroyed in a fire. 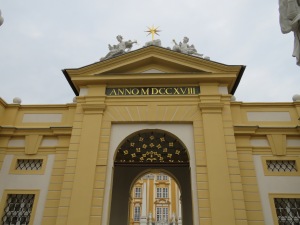 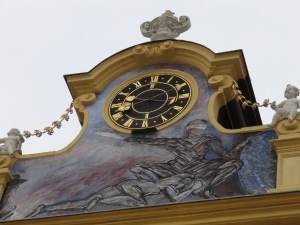 Now the end of the tour was a bit odd because the tour guide left the tour in the library and didn’t walk us to the chapel. The tours actually can’t be conducted in the chapel, but she never showed us where to exit the abbey or when to be back to the bus to the ship. Later we did talk to one of the main people on the Viking Baldur who did say the guide pretty much screwed up and should have walked us to the chapel, told us the bus schedule, and showed us the exit before leaving. There definitely were older people confused and lost here because of a couple poorer tour guides. Overall this was a bit odd since nothing was ever said about time schedules. Once we found Caitlyn, the program director, we were given the opportunity to either walk down to Melk or go back to the riverboat.

Once at the riverboat we still had to wait out the time for the Viking Baldur to start heading down the Wachau Valley. I felt like we were in Melk for hours since we didn’t leave until around 2pm. A lot of people arrived back to the boat quickly after the abbey tour or free time in Melk.

In the late afternoon we finally started down the Danube through the Wachau Valley. Along the way we passed a lot of small towns and vineyards. Finally we were able to sit on the Sun Deck since this had been closed throughout most of the cruise. Before arriving in Krems, everyone actually had to sit down on the Sun Deck due to a very low bridge. The bridge actually could be touched easily if standing up. 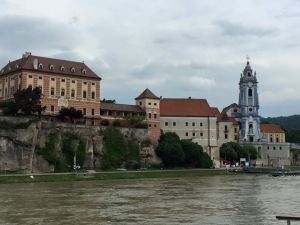 Around 3:45pm we arrived in Krems where shuttle buses were offered to the town center. We did hurry off and got the 4pm shuttle, which filled very quickly. A shuttle was offered at 4pm, 4:30pm, and 5pm to the center with a shuttle offered back to the Viking Baldur at 5:30pm, 6pm, and 6:30pm. 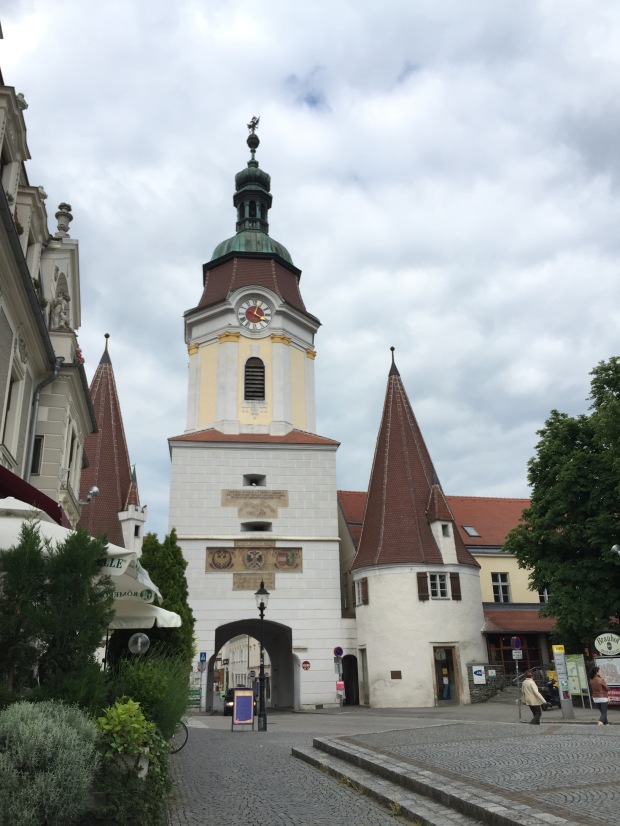 After arriving in the center we walked the main shopping street and were probably done within 30 minutes. I don’t know if we missed something, but there literally wasn’t much to see or do. Some stores were already closed by 4:30pm and some were completely empty for lease. I did end up buying a scarf I thought was cool from a store that reminded me of typical stores geared towards my age at home. While walking back to the shuttle bus stop, we did come across a schnapps store that we hadn’t notice before that sold apricot schnapps. The schnapps was pretty tasty and both my Mom and myself were compelled to buy two bottles to take home. Instead of taking the shuttle back we did walk back to the riverboat. The walk probably took about 15 to 20 minutes from the town center. The boat did stay in Krems until late in the evening.

Just an additional note, dinner on the Viking Baldur was Austrian themed that night. The dinner was partial buffet and then you ordered the entrees. None of the food items excited me so we decided to eat in the Aquavit Terrarce. Well you can’t escape Austrian night on Viking! The same meal was served there too. The presentation was very nice and I will give compliments to the chef for making an interesting dinner, but I will admit German and Austrian food really doesn’t excite me. I was able to order a steak from the anytime menu and I do believe I was the only person to do this that night. Actually the anytime steak on Viking was really good and I’m happy I tried it. It was much better than anything I’ve been served on anytime menus from other cruise line.

Overall this day was pretty uneventful and rather on the boring side. Some people were thrilled by it while both my Mom and myself agree the ports could easily be skipped. I personally felt Melk and Krems were a waste of time that could have been spent elsewhere, like an extra day in Vienna.